Students, educators rally at 2014 STEM Day at the Capitol

Watch a video of the event.

Matthew McKean is eager to explain the features of the LEGO robot he built along with his friends.

Matthew, a fourth grader at Kennerly Elementary School, holds the robot in his hand, pointing out how their robot could help fight wildfires—interacting with ambulances, moving power generators, signaling to aircraft. 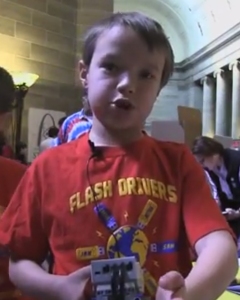 He helped build the robot as part of team, the Flash Drivers, to compete in a FIRST LEGO League (FLL) competition—an event designed to help inspire kids to pursue math and science careers.

However, for Matthew, the main motivation was having fun.

“FLL is the funnest thing ever,” he said.

Matthew and hundreds of students and education supporters rallied at the Missouri Capitol on Thursday, March 6, for STEM Day at the Capitol. With demonstrations and booths highlighting Missouri student achievement, the day was a celebration of the state’s growing math and science efforts.

“Every year, we gather in the Missouri State Capitol to showcase science, technology, engineering and mathematics. We are emphasizing the experiences these students are having and the career opportunities they can lead to,” said Brian Crouse, vice president of the Missouri Chamber Education Foundation, which helped organize the event. “It is always exciting to be able to bring this event to our capital and show our lawmakers that STEM education is making a difference in Missouri.”

Joshua Harmon, a seventh grader from Camdenton Middle School, said his work on a local robotics team has inspired him to pursue mechanical engineering as a career. He said he enjoys getting to build robots and compete against other teams.

“It’s tons of fun because you get to build a robot, you get to compete,” he said. “It’s like a sport only you get to use your brain.”

Deshawna Flesch, a 10th grader from Gateway Science Academy, displayed her research into how earthworms impact soil quality. She said getting hands on science experience has influenced her future.

“In college I plan on minoring in herpetology with reptiles and stuff like that and majoring in some kind of environmental conservation,” she said.

Many education stakeholders also attended STEM Day at the Capitol. Kathie Reuter, an operational partner with the FIRST LEGO League of Eastern Missouri said her personal goal was to get kids interested in science, math and technology.

“There seems to be a lot of emphasis on sports and they get a lot of press,” she said. “It would be nice for kids to get a lot of recognition for what they’re doing in the math, science, engineering and technology fields.”

While at the Capitol, students were able to witness a live house floor debate on a STEM bill, HB 1459, sponsored by Rep. Jeanie Lauer, R-Blue Springs, which authorizes the Innovation Campus Tax Credit program.  Students were able to see the legislative process in action, and learn about a bill that can possibly help them years from now by providing more STEM internship opportunities around the state.

The Missouri Mathematics and Science Coalition looks forward to next year,  the first week of March 2015, when once again hundreds of enthusiastic students, parents and educators land at the Missouri state Capitol to demonstrate why STEM is not only fun, but also paramount to Missouri’s economic future.

For more information about STEM activities, contact Crouse at bcrouse@mochamber.com or by phone at 573-634-3511.